A career at Ketterer always develops individually with our employees and according to their and our ideas.

The following employees have already taken the opportunity and enjoyed a successful career at Ketterer. Convince yourself of the different possibilities that a job at Ketterer brings with it and take a look at the success stories of our employees. 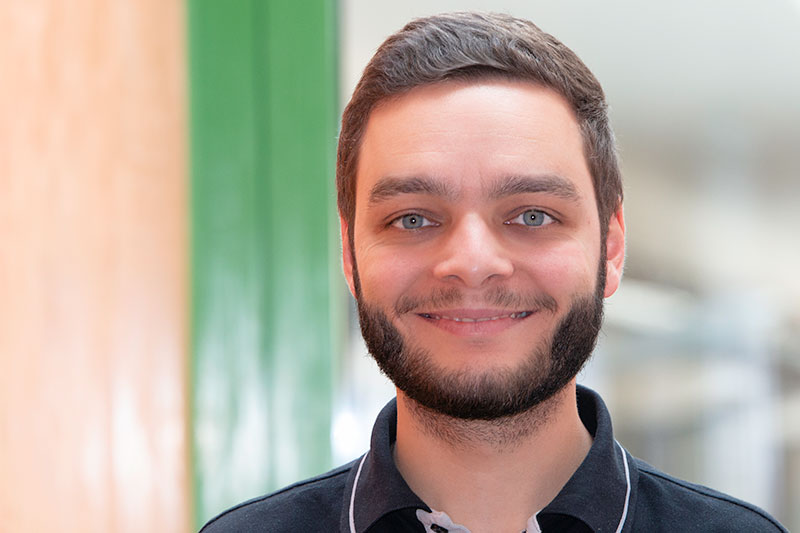 This year I had my interview for the industrial mechanic apprenticeship before the summer vacation. At that time it was still called the Ketterer company "Getriebebau". Here I received an acceptance promptly, which I was very pleased because some friends of mine had difficulties finding an apprenticeship position despite many applications. I took this chance and asked for a vacation job at the same time. During the summer vacation and afterwards, I spent around three months in the assembly department as a mini-jobber in order to earn a little pocket money in addition to school.

On September 1st, 2006 I started my apprenticeship as an industrial mechanic specializing in precision engineering. During my apprenticeship I got to know different departments. I particularly liked the “Dentistry” department. The manufacture of gears with conventional and CNC-controlled machines fascinated me enormously. Towards the end of my training, I was offered a permanent position as a skilled worker in this department. At this point I would also like to thank the head of the dental and milling department once again, as he recognized the potential in me.

During this period I was responsible for setting up the CNC and conventional gear cutting machines. Here I was able to gain some experience in the field of production.

As we at Ketterer wanted to train the machining mechanic in addition, I was asked if I would like to train as a trainer in order to train exactly this profession in the field of production. The task sounded promising, which is why I acquired the AEVO certificate part-time at the Chamber of Commerce in Villingen in cooperation with Ketterer.

After receiving my training certificate, I worked in the Ketterer training team and continued to work as a machine setter in the dental workshop. Since I wanted to acquire even more knowledge in order to be able to offer the trainees better training, the idea came to me to do further training to become an industrial foreman in metal. Since the Ketterer company decided to set up a training workshop and a management of the training workshop was needed for this purpose, I was promised the advanced training for industrial foremen. At the same time, the Ketterer company offered to cover the costs for this.

During this period I visited the Chamber of Commerce and Industry in Villingen again in order to acquire part-time training as an industrial foreman in metal. Here, too, as before, I worked in dentistry as well as in industrial training.

In January I received the master craftsman's certificate and was finally a certified industrial master. However, the training workshop was currently still in the planning phase.

Since a production department was split up due to operational restructuring, I was temporarily able to take over the "Machining Production 2" department as department manager. In addition, I continued to look after the commercial cutting machine trainees in the area of production.

Now the time had come. The training workshop was set up and I was employed as a commercial training manager for all of our commercial training professions, not just the cutting machine operator. I have also decided to also volunteer for the IHK's examination committee in the field of commercial apprenticeships. This enables me to gain further experience, tips and tricks as a trainer and to continuously improve and promote training at Ketterer.

What I like about Ketterer is that it is a medium-sized company where I know almost all of my work colleagues personally. And as can be seen from my career, I particularly like the support from the company, because at Ketterer you also get the opportunity to develop yourself professionally and expand your potential. 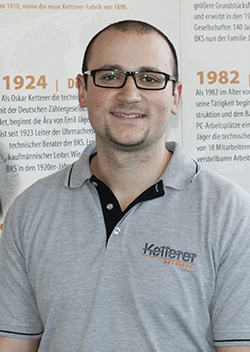 On September 1st, 2009, my new phase of life began with my Plus course at Ketterer, in cooperation with Furtwangen University. At the same time, I completed an apprenticeship as an industrial mechanic and studied mechanical engineering. Normally, 7 years would be provided for training and studies, with Studium Plus you have the opportunity to achieve both within 4.5 years.

Back then, I got the first advertised Studium Plus position at Ketterer. It was a new and positive experience for the company as well as for me.

In February 2014 the time had finally come. I had my skilled worker certificate and the engineer in my pocket. Then I got a job as a designer at Ketterer. After a few months as a designer, I was offered the position of project manager in development in November 2014, which I naturally accepted with thanks and pride. I have worked with this position to this day and I still enjoy it as much as it did at the beginning.

In addition, I am jointly responsible for the Studium Plus students in the Ketterer training team and I have managerial responsibility for our CAD department.

What do I particularly like about the Ketterer company?

What I like most about Ketterer is the freedom of choice in my position and my colleagues. You can laugh with them and I enjoy coming to work day after day. 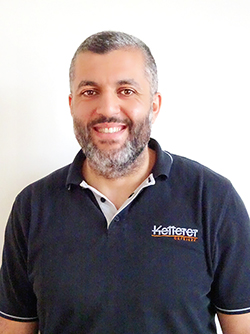 This year I found work as a temporary worker in assembly. There used to be only one assembly, now we have three departments. I started in March and only three months later I was asked if I would like a permanent position. Since I enjoy assembling gears and complicated mechanisms, I immediately accepted.

After a few years as an assembly worker, I was asked if I would like to take on the duties of an island representative. Some time later I was even offered to work as a foreman. I was happy to accept both responsibilities and, thanks to the large department, ultimately also filled both roles. Ketterer has always supported me in this career.

At first it was planned that I would continue to work as a foreman until the training to become a master craftsman was completed. Ultimately, I got the job as a master craftsman earlier and now experience practice and theory at the same time.

I will probably finish my master craftsman apprenticeship in spring 2019, but I would like to continue my education and learn more afterwards. Thanks to my commitment, my organizational talent and my planning skills, the position suits me perfectly and the work is a lot of fun. It doesn't matter how much work I have to do: the pleasant working atmosphere and the support from colleagues and superiors mean that even the greatest challenges can be mastered.

What do I particularly like about the Ketterer company?

The promotion of every employee who wants to develop and train himself further.